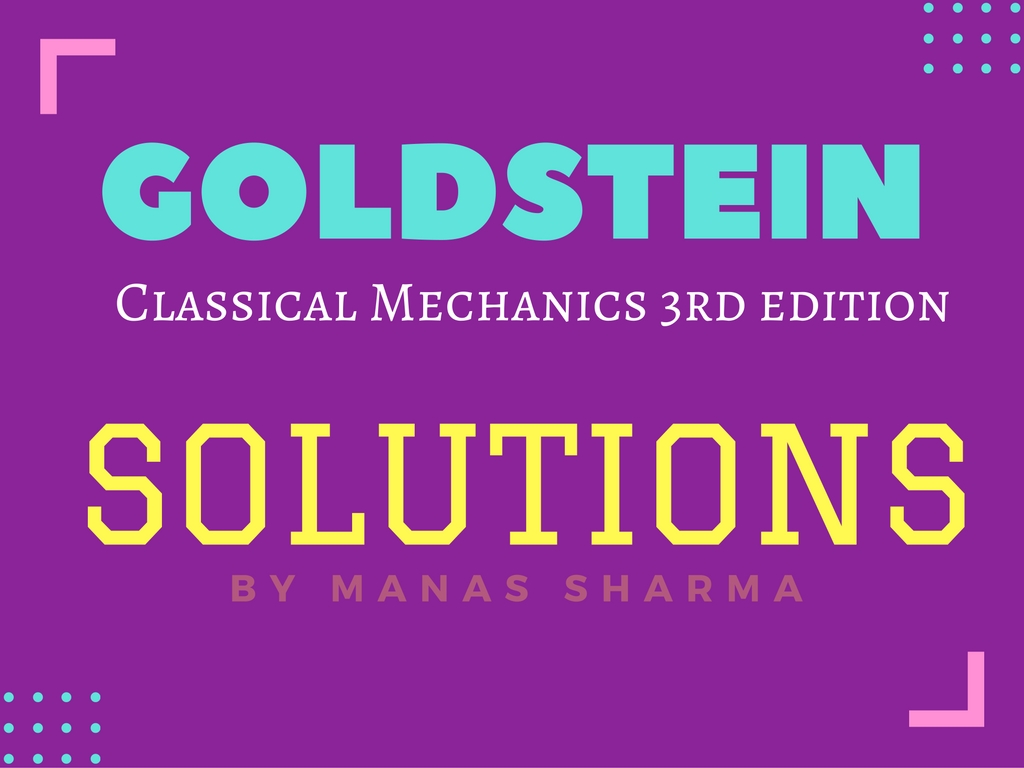 I have tried solving some of the problems of the Chapter 9 of Goldstein Classical mechanics.
You can download the pdf version here:Goldstein Chapter 7 Solutions
I have also embedded the pdf below as well as posted them in this blog post.


Chapter 7 – The Classical Mechanics of the Special Theory of Relativity.

7.13. Show by direct multiplication of the vector form of the Lorentz transformation equations(Eq.7.9), that

Also from Eq.7.9 of Goldstein we have,

Now, we know that

7.14. Calculate the length of a rod of rest length 2m, moving at 0.73c as observed by an observer at rest. Also, compute at what speed the length in motion of the rod will be half the rest length.
Sol. 7.14.
We have,
Rest length,

The observed length ‘l’ is related to the rest length as,

Now, we are asked to find the speed(or β) for which length is half the rest length,
i.e.

Relativistic mass, ‘m’, is given as

where m0 is the rest mass.

7.19. A meson of mass mπ at rest disintegrates into a meson of mass mμ and a neutrino of effectively zero mass. Show that the kinetic energy of the μ meson is

Sol.7.19.
We are given the following process:

Four-Momentum of a particle is given by,

Using the above formula,
The Four-Momenta of the particles are as follows:
For pion:

Conservation of energy and momentum gives:

Therefore the mean lifetime of the travelling pion is 1.6667 times that of the pion at rest.

7.21. A photon may be described classically as a particle of zero mass possessing nevertheless a momentum h/λ = hν/c, and therefore a kinetic energy hν. If the photon collides with an electron of mass m at rest, it will be scattered at some angle θ with a new energy hν’. Show that the changes in energy is related to the scattering angle by the formula

where λc=h/mc, is known as the Compton wavelength. Show also that the kinetic of the recoil motion of the electron is

The above diagram shows the process described in the problem. As you can see it is in fact, the famous, ‘Compton Scattering’.

We will solve this problem using 4-momenta.
The four momenta of the particles before and after the collision are as follows:
Photon, before collision, moves with energy hν and momentum p in the direction n, therefore its 4-momentum is:

Photon, after collision, moves with energy hν’ and momentum p’ in the n’ direction, therefore its 4-momentum is:

Electron, before collision, is at rest(hence momentum=0) and has rest mass energy mec^2, therefore its 4-momentum is:

Electron, after collision, moves with energy E’e and momentum p’e, therefore its 4-momentum is:

From the conservation of Energy and Momentum we have,

This is the total energy of the recoil electron.
We are interested in the Kinetic Energy, which is the Total Energy-Rest mass Energy:

using the relation derived in the first part of the question,

Plugging this value of λ’ in the expression of Kinetic Energy,

which is the required result.

If you have any doubts/question/suggestions regarding the solutions, just hit me up in comments section down below.