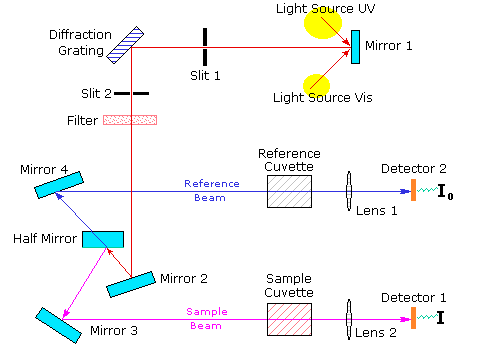 Absorption/Reflectance spectroscopy in the UV-Visible region (200nm-800nm) is called UV-Vis spectroscopy.
This helps in understanding the observed colors of compounds. Basically, light is made to fall on the sample, and the intensity of the transmitted or reflected light is measured as a function of wavelength.

The following diagram shows the components of a typical spectrophotometer.

The functioning of this instrument is relatively straightforward. A beam of light from a visible and/or UV light source (colored red) is separated into its component wavelengths by a prism or diffraction grating. Each monochromatic (single wavelength) beam in turn is split into two equal intensity beams by a half-mirrored device. One beam, the sample beam (colored magenta), passes through a small transparent container (cuvette) containing a solution of the compound being studied in a transparent solvent. The other beam, the reference (colored blue), passes through an identical cuvette containing only the solvent. The intensities of these light beams are then measured by electronic detectors and compared. The intensity of the reference beam, which should have suffered little or no light absorption, is defined as

. The intensity of the sample beam is defined as

. Over a short period of time, the spectrometer automatically scans all the component wavelengths in the manner described. The ultraviolet (UV) region scanned is normally from 200 to 400 nm, and the visible portion is from 400 to 800 nm

Experimental measurements are usually done in terms of Transmittance

is the intensity of light that went through the sample and

is the intensity of the incident beam.

Observations can also be made in terms of Absorbance

which is defined as:

Modern absorption instruments can usually display the data as either %-transmittance, or absorbance.

The absorption of UV or visible radiation corresponds to the excitation of outer electrons. When a photon is incident on the sample, then it’s energy can be absorbed to excite the electron to an excited state. Since the energy levels of photon and electrons are quantized, therefore only certain transitions are possible. There are three types of electronic transition which can be considered:

When an atom or molecule absorbs energy, electrons are promoted from their ground state to an excited state. In a molecule, the atoms can rotate and vibrate with respect to each other. These vibrations and rotations also have discrete energy levels, which can be considered as being packed on top of each electronic level.

Absorption of ultraviolet and visible radiation in organic molecules is restricted to certain functional groups (chromophores) that contain valence electrons of low excitation energy. The spectrum of a molecule containing these chromophores is complex. This is because the superposition of rotational and vibrational transitions on the electronic transitions gives a combination of overlapping lines. This appears as a continuous absorption band.
[Note: A chromophore is a chemical group which absorbs UV-visible radiation at a specific wavelength, with little influence from the other groups in the molecule. Typical chromophores in organic molecules are C=C double bonds, C=O carboxylic groups and aromatic rings. Only when two or more of these groups are conjugated, a relevant change in their absorption properties is observed.]
Possible electronic transitions of

An electron in a bonding

orbital is excited to the corresponding antibonding orbital. The energy required is large. For example, methane (which has only C-H bonds, and can only undergo

transitions) shows an absorbance maximum at 125 nm. Absorption maxima due to

transitions. They can be initiated by light whose wavelength is in the range 150 – 250 nm. The number of organic functional groups with

peaks in the UV region is small.

Most absorption spectroscopy of organic compounds is based on transitions of

excited state. This is because the absorption peaks for these transitions fall in an experimentally convenient region of the spectrum (200 – 700 nm). These transitions need an unsaturated (containing double/triple bonds) group in the molecule to provide the

transitions normally give molar absorbtivities between 1000 and 10,000 L mol-1 cm-1.
The solvent in which the absorbing species is dissolved also has an effect on the spectrum of the species. Peaks resulting from

transitions are shifted to shorter wavelengths (blue shift) with increasing solvent polarity. This arises from increased solvation of the lone pair, which lowers the energy of the

orbital. Often (but not always), the reverse (i.e. red shift) is seen for

transitions but is overshadowed by the blue shift resulting from solvation of lone pairs.

and the intensity of the incident light

, depends on the path length of light through the sample

of the sample’s transition, and the difference in the population of the initial state

of the absorbing species and the path length

is the proportionality constant called the molar absorptivity.

The Beer-Lambert Law is useful for characterizing many compounds but does not hold as a universal relationship for the concentration and absorption of all substances. A 2nd order polynomial relationship between absorption and concentration is sometimes encountered for very large, complex molecules such as organic dyes (Xylenol Orange or Neutral Red, for example).

which is the effective area seen by a photon of frequency

. Take a slab of infinitesimal width (dz) of sample.

is the intensity entering the sample at

is the intensity entering the infinitesimal slab at

is the intensity absorbed in the slab, and

is the intensity of light leaving the sample. Then, the total opaque area on the slab due to the absorbers is

is the number of molecules per unit volume.) Then, the fraction of photons absorbed will be

Integrating from z=0 to z=b

For semiconductors, UV-vis spectroscopy offers a convenient method of estimating the optical band gap, since it probes electronic transitions between the valence band and the conduction band. The optical band gap is not necessarily equal to the electronic band gap, which is defined as the energy difference between the valence band minimum (VBM) and the conduction band maximum (CBM); however, it is often approximated as such because there are few convenient methods for measuring the electronic band gap. Exciton binding energies, d-d transitions, phonon absorption and emissions, and excitations to or from defect bands and color centers can complicate interpretation of UV-vis spectra; nevertheless, an estimation of the optical band gap is obtainable. Furthermore, UV-vis allows for the characterization of this electronic transition as either direct or indirect and whether it is allowed or forbidden.

The linearity of the Beer-Lambert law is limited by chemical and instrumental factors. Causes of nonlinearity include:
-> deviations in absorptivity coefficients at high concentrations (>0.01M) due to electrostatic interactions between molecules in close proximity
-> scattering of light due to particulates in the sample
-> fluoresecence or phosphorescence of the sample
-> changes in refractive index at high analyte concentration
-> shifts in chemical equilibria as a function of concentration
->non-monochromatic radiation, deviations can be minimized by using a relatively flat part of the absorption spectrum such as the maximum of an absorption band
-> stray light

To derive a band gap value from a UV-vis measurement, the data must be interpreted. Interpretation is often made difficult by the shape of the absorption spectrum and the ability of the user to estimate the line tangent to
the slope of the absorption data. This procedure requires the drawing of a tangent line to the curve, which is subjective and can result in significant error.

Other sources of error in a UV-vis measurement often arise from reflection,
refraction, or scattering that may occur at the surface and interfaces of the material or
from the unwanted transmission of light during a diffuse reflectance experiment. These
effects decrease the amount of light that reaches the detector and produce seemingly
higher absorption values. This can result in nonzero baselines or sloped base lines that
need to be taken into account when analyzing spectra. To minimize reflection or
refraction during a transmission experiment, the user should ensure that the sample sits
normal to the path of incident light. Scattering effects can be minimized by placing the
sample as close as possible to the detector. In a diffuse reflectance measurement, the user
should place a highly reflective standard against a transparent sample to decrease
transmitted light.

Pitfalls of the experimental procedure often come from an improperly positioned
sample, as mentioned above, or from measurements performed before the lamp has had
proper time to warm up, resulting in an unreliable base line. Improper shielding of the
sampling chamber from ambient lighting can also contribute to the background signal and
decrease the signal-to-noise ratio. Lastly, harmonics that arise from using a grating
monochromator can lead to inaccurate measurements if they are not removed using longpass-
filters.