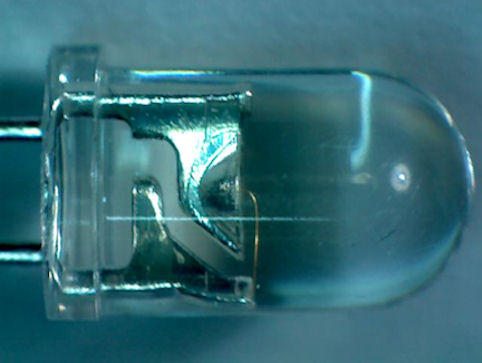 Energy is needed to create an electron-hole pair, and this energy is released when an electron and a whole recombine. In silicon and germainium the recombination energy is absorbed by the crystal as heat, but in certain other semiconductors, for instance gallium arsenide, a photon is emitted when recombination occurs. This is the basis of the light-emitting diode (LED). Forward bias is used in an LED, so the electrons and holes both move toward the p-n junction, as in figure(1).c, where they recombine to create photons.

A fairly small current is used in an LED and the and the photons are produced by spontaneous emission. When the current is high, spontaneous emission may not keep up with the rate of arrival of electrons and holes in the depletion region, and the result is a substantial population inversion there. This is the condition for laser action to occur, with spontaneously emitted photons causing avalanches of additional photons by stimulated emission. In a semiconductor laser opposite ends of the p-n junction are made parallel and partly reflecting. The coherent light produced by the stimulated emission is intensified as it moves back and forth in the thin depletion region, and emerges through the ends.

The process that occurs in an LED is reversed in a silicon solar cell. Here photons arriving at or near the depletion region of a p-n junction after passing through a thin (<1 um) outer layer of silicon produce electron-hole pairs is sufficiently energetic. The electrons are raised to the conduction band, leaving holes in the valance band. The potential difference across the depletion region provides an electric field that pulls the electrons to the n region and the holes to the p region. The newly freed electrons can then flow from the n region through an external circuit to the p region where they recombine with the newly created holes. In this way