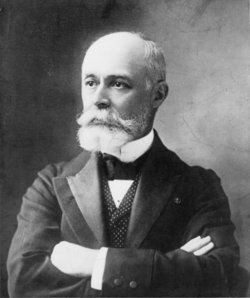 (1852-1908) was born and educated in Paris. His grand-father, father, and son were also physicists, all of them in turn professors at the Paris Museum of Natural History. Like his grandfather and father, Becquerel specialized in fluorescence and phosphorescence, phenomenon in which a substance absorbs light at one frequency and reemits at another low frequency.

In 1895 Roentgen had detected X-Rays by the fluorescence in an appropriate material. When he learned of this early on, Becquerel wondered whether the reverse process might not occur, with intense light stimulating a fluorescent material to give off X-Rays. He placed a fluorescent uranium salt on a photographic plate covered with black paper, exposed the arrangement to the sun, and indeed found the plate fogged when he had developed it. Becquerel then tried to repeat the experiment, but clouds obscured the sun for several days. He developed the plates anyway, expecting them to be clear but to his surprise they were just as fogged as before. In a short time he had identified the source of the penetrating radiation as the uranium in the fluorescent salt. He was able to show that the radiation ionized gases and that part of it consisted of fast charged particles.

Although Becquerel’s discovery was accidental, he realized its importance at once and continued to explore various aspects of radioactivity for the rest of his life. He recieved the Nobel Prize in physics in 1903.