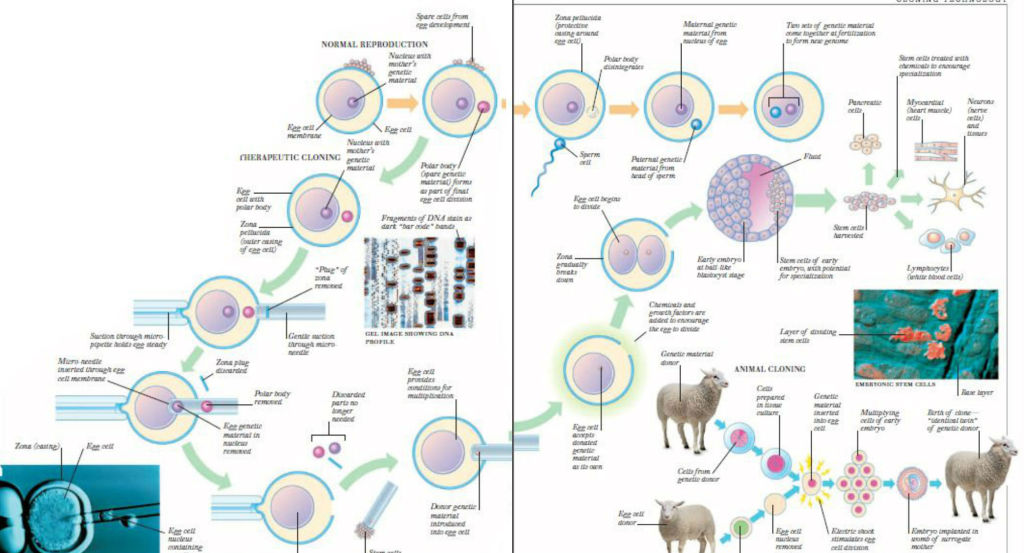 IN A LIVING CELL THE GENETIC MATERIAL DNA (deoxyribonucleic acid) contains thousands of units called genes that carry instructions for development, growth, and repair of the living creature. During normal reproduction, half the mother’s genetic material contained in an egg cell joins with half the genetic material from the father carried in a sperm cell, to form a unique new genome (set of genes) for a new life. During the early stages of embryo development, the fertilized egg divides into stem cells, which have the potential to become specialized into the hundreds of cell types in a body. Through therapeutic cloning, stem cells can be produced in a laboratory. It is hoped that in the future this technology can be used to grow new tissue that can be transplanted back into the donor to treat illness, without fear of rejection—when the body recognizes a transplanted part as “foreign” because it has different genes, and tries to destroy it. In another form of cloning, performed experimentally using animals, genetic material from a donor animal has been inserted into an egg from another animal that has been emptied of its own genetic material, to produce an animal genetically identical to the donor.