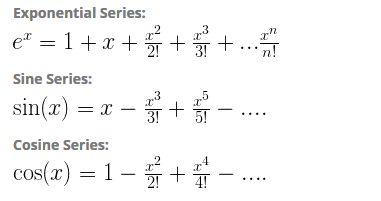 Finding the sum of a series(finite or infinite) is a crucial part of computational mathematics.

Many mathematical functions can be simply expressed in the form of a series as shown below:

NOTE: These can be obtained using the Taylor Series expansions.

In this post I will show you how to find the sum of a finite series efficiently.

Note: the no. of terms in this series is

Now if you wanted to find the sum of the first 30 terms, then naively, you would try to run a loop and evaluate each term and thus find the sum. Though, doable, this method is not very efficient, especially if there are large numbers involved(like 20!).

Now, using this, the successive terms can be found as:

For a program to find the sum for the first n terms can be written as shown below: