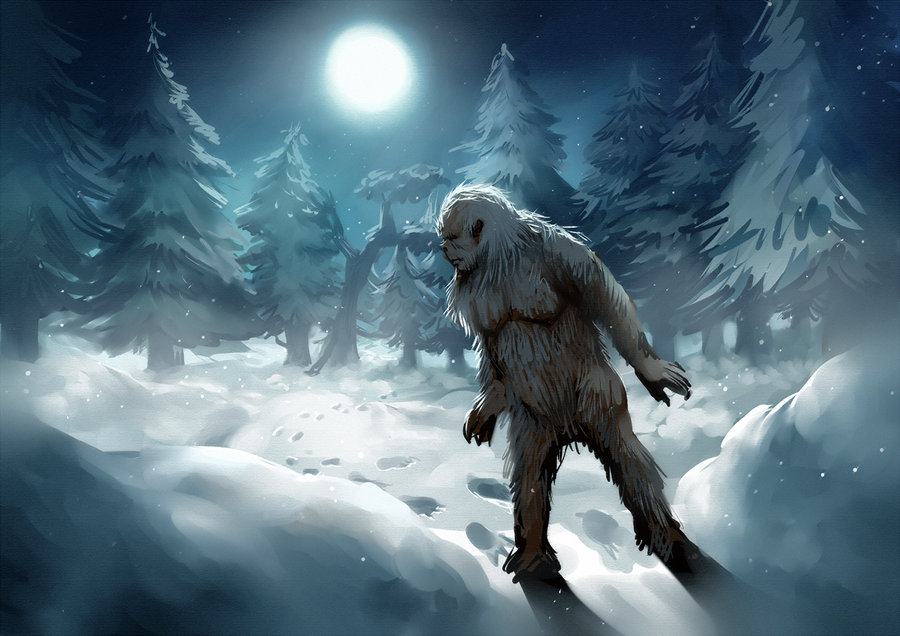 Have you ever come across a giant-size creature that looks as much like an animal as he looks like a human? Such a creature is known to have existed in the snowy areas. The creature is often spotted around ice-cold regions and is sure to take your breath away if you look at him. Chances are you might faint at the sight or run away from his dreadful persona. Yeti, as widely known, is one of the most famous crypto-zoological animals in the world. To know more about him, read further… The Yeti or the monstrous Snowman as he is known in the West has also been called as the Bigfoot and Nessie. However to the Sherpas, the Yeti is not an imaginary creature but a real and alive creature. Since 1951, when the first presence of this animal came out of the Himalayas, several Western explorers have found convincing evidence that the Sherpas were correct. Expeditions into the Himalayas have uncovered mystifying stories of strange human-like creatures that live in the region. In 1951, Eric Shipton, a world-famous mountaineer, came across a curious set of foot marks. One footprint was 13 inches long and the other was 8 inches wide. It didn’t look like it was drawn by a man or an ape. Loren Coleman, who is an expert on cryptozoological animals, was of the opinion that the discovered footprint by Shipton by Shipton is “a very big piece of evidence because it showed toes, individual toes. It showed a squat, square footprint, which a lot of the other expeditions had found.” Unfortunately, he adds, Shipton did not carry a relevant photographic equipment to capture a detailed image. In 1957, a Texas oilman named Tom Slick and explorer Peter Byrne set off for the Arun Valley in north-eastern Nepal in Search of Yeti. Byrne believed that since the Sherpas knew the Yeti was a real animal, they called him “hairy man” that lived separate from them. Sherpas described the Yeti as being man-like ink form and around 5-foot-6, 5-foot-7, 5-foot-8 and totally covered with hair. The face would be bare of hair, and it walked fully erect. In another part of the valley, Tom Slick and his Sherpa guides discovered a set of tracks in mud, which were unique because they knew melting and shifting a now could alter tracks. They measured 10 inches long and 7 inches wide. According to anthropologist Dr. George Agogino, it was similar to the footprint discovered by Eric Shipton six years earlier. In 1925, N.A. Tombazi, a photographer and member of the Royal Geographical Society, wrote that he saw such a creature at about 15,000 fit (4,600 m) near Zemu glacier. Tombazi later wrote that he observed the creature from about 200 to 300 yard (180 to 270m) for about a minute. “Unquestionably, the figure in outline was exactly like a human being, walking upright and stopping occasionally to pull at some dwarf bushes. It showed up dark against the snow, and as far as I could make out, wore no clothes.” That was in 1957 but surprisingly, the frequency of reports increased during the early 20th century, when Westerners began making attempts to scale the mountains in the area and occasionally reported seeing either the giant-size creatures or the strange tracks. In 2004, Henry Gee, editor of the prestigious journal nature mentioned that the Yeti as an example of a legend needs further research, stating, “The discovery that Homo survived until so very recently, in geological terms, makes it more likely that stories of other mythical, human-like creatures such as Yetis are founded on grains of truth… now, cryptozoology, the study of such fabulous creatures, can
come in from the cold. In early December 2007, an American television host and his team reported that they came across a series of footprints in the Everest region of Nepal resembling descriptions of Yeti. Each of the footprints measured 33 cm (13 inches) in length with five toes that measured a total of 25 cm (9.8 in) across. Casts were made of the prints for further research. The footprints were examined by Jeffery Meldrum of Idaho State University who believed them to be too morphologically accurate to be called as fake or man made. Meldrum also stated that they were similar to a pair of Bigfoot footprints that were found in another area. Then, during the third season of mid finale visit to Bhutan, Gates’ team found a hair sample on a tree that they took back to have analyzed. After it was tested, it was concluded that the hair belonged to an unknown primate. On July 25, 2008, the BBC reported that hair sample collected in the remote Garo Hills area of eastern India by Dipu Marak had been analyzed at Oxford Brookes University in the UK by primatologist Anna Nekaris and Microscopy expert Jon Wells. These initial tests were uncertain, and an ape conservation expert told the BBC that there was similarity between the cuticle pattern of these hair strands and specimens collected by Edmund Hilary during Himalayan expeditions in the 1950s and donated to the Oxford University Museum and announced a DNA analysis. This analysis has since revealed that the hair came from the Himalayan Goral. On October 20, 2008, a team of seven Japanese adventurers photographed footprints which could allegedly have been made by a Yeti. The team’s leader, Yoshiteru Takahashi claims to have observed a Yeti on a 2003 expedition and is determined to capture the creature on film. A group of Chinese scientists and explorers propose to renew searches in Shennongjia province which was the sight of expeditions during the 1970’s and 1980’s. However, the research continues and the mystery unfolds not completely but in bits at every expedition.